We’re three 17-year-old girls from Marlborough College (Wilts) who have known each other for years. Together we discovered that it was in our reach to change the futures’ of disadvantaged kids in a way that hasn’t been possible before.

With one of us having lived in Kenya, we had already formed a strong link with the Huruma slum community. This quickly led to the realisation that the only difference between the kids and ourselves, was the circumstances in which we’ve grown up. This is unfair and because of the advances in technology, it’s possible for us to change this. 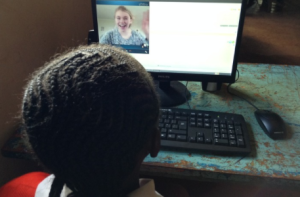 An award winning “TED talk” by Prof. Sugata Mitra inspired the EDCLUB initiative. His project empowered kids in low-income areas in India to self-educate, by providing them with computers and Internet access. This opportunity encouraged the kids to explore and learn.

In 2013, a group of students at Marlborough College – Molly Macaire, Lucy Sherriff, Maeve Mahony and Jemima Jones – decided to set up a pilot project in Huruma Slum, Nairobi. They raised the funds and put computers and a Skype link into the chapel in order to put into practice Prof Mitra’s ‘SOLE’ (Self Organised Learning Environment) concept.

This was made possible by the fact that one of the group of students, Molly Macaire, had lived in Kenya and had worked closely with the community: there was already a relationship of mutual trust with the community leaders, and a connection with the local kids.

After a successful pilot, and a community consultation with the local stakeholders, funds were raised in the UK to construct a purpose built computer lab for the project in the slum.

The original mentors promoted the EDCLUB concept through giving talks at other schools and social media. As knowledge of the movement expands, a wider range of mentors continue to join the initiative.

Schools and Colleges attended by mentors:

Ask them a question, give them the world...